Attending classic car events, gives you the chance to see fantastic classic vehicles. Whether you are a collector, buyer, or simply an admirer, classic car auctions are ideal for spotting rare and interesting models. These events are frequented by serious car collectors as well. Hence, you’ll have a chance to network with other classic car fans.

In this post, we outline the top five classic car auctions in the United States. Let’s not waste more time and start mentioning the high-profile classic car events already:

Where are Barrett Jackson auctions held?

Barrett-Jackson hosts various auctions throughout the nation. So if you are considering investing in a classic car, consider exploring collector car events in Scottsdale, Arizona; Palm Beach, Florida; Mohegan Sun in Connecticut and Las Vegas, Nevada.

And if you don’t have a chance to attend any of these events. You can watch them via live stream on History Channel and FYI. It may not be the same as being on the event floor, but you will still get to see some of the world’s most unique and valuable vehicles.

Can anyone bid at Barrett-Jackson?

If you want to bid on a car you should first register as a buyer and comply with certain financial requirements. You’ll pay a registration fee and submit a few things, which include a recent photo, copy of your driver’s license, proof of auto insurance, and method of payment. The last requirement proves the bidder’s credit worthiness and guarantees that “when the hammer falls”

Gooding & Company is yet another leading automotive auction. It specializes not only in classic cars but also in antique and racing vehicles. This car auction house hosts three well-known auctions every year.

One is held in Scottsdale, Arizona. The other two take place in Amelia Island, Florida and Pebble Beach, California. One can only imagine how magnificent it must be to attend the last two shows while enjoying sunsets at the seaside. Beautiful cars and breathtaking views are a match like no other.

Also, you can watch the Gooding & Company Auctions via live webcast. Though we wouldn’t miss a chance to visit this car bidding event for anything in the world.

What are some of the most notable sales at Gooding & Company?

Gooding & Company is far smaller than Barrett-Jackson. Nevertheless, various cars sold at the auction house events have reached into millions.

One of the most notable sales happened in May 2010. A 1936 Bugatti Type 57SC Atlantic sold for a hefty amount of $31 million. Petersen Automobile Museum in Los Angeles displayed this magnificent piece of art for a number of times. Today, you can often spot it at the Mullin Automotive Museum. 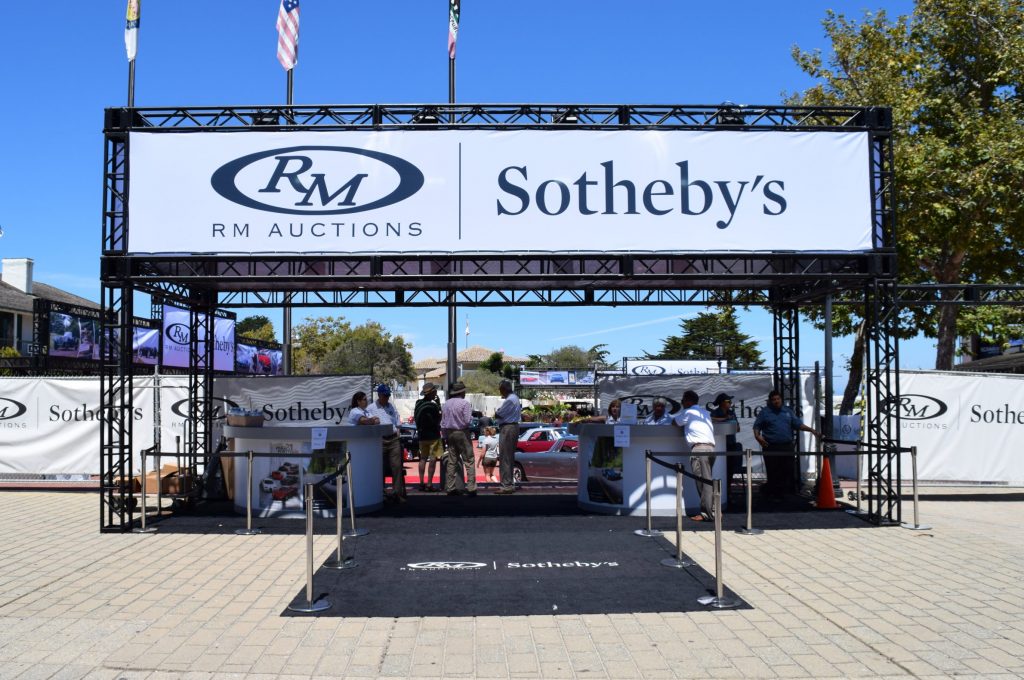 RM Sotheby’s is one of the largest auction houses for investment-quality automobiles in the world. Since 1976, RM Auctions has transformed the global car auction scene. It aims to raise vehicle auction standards to the highest levels as well. Furthermore, in February 2015, RM Auctions officially partnered with Sotheby’s. Together they became RM Sotheby’s.

According to RM Sotheby’s official website, this global auction house, holds over ten auctions across six US states and four countries each year.

What was the most expensive car sold at RM Sotheby’s?

In 2018, A 1962 Ferrari 250 GTO became the most expensive car ever sold at an auction. Any auction. The hammer fell at $48,4 million dollars. Many collectors consider this model the most beautiful Ferrari to ever exist. Only 36 were ever made, and the car that broke the record is the third GTO the automaker built. At the time of sale, it maintained many of its original parts.

This privately-owned international auction house was founded in 1793 in London. The Bonhams Motoring Department holds auction sales of rare classic cars and motorcycles.

This auction house hosts car events in London, New York, Los Angeles, and Hong Kong. We highly recommend the auctions hosted by Bonhams. You will get to see some of the rarest classic cars in the world.

Which famous cars have been sold at Bonhams?

The notable auction house is closely associated with many celebrity names. Take, for example, the exquisite Rolls Royce Phantom V that belonged to his majesty, the king of rock-and-roll, Elvis Presley. Another legendary ride that happened to be part of Bonhams’ events was Pat Boon’s 1954 Mercedes-Benz 300 SL “Gullwing.” The 1929 Rolls Royce Phantom I that used to take the silver screen goddess Marlene Dietrich around was also sold by Bonhams auctioneers.

Starting off as a family business, the Mecum Auction Company has grown a lot during the past three decades. The company held its first official auction in 1988 at the Rockford Airport. Since then, the Mecum has become one of the leading events for collector cars, vintage and antique motorcycles in the world.

Where are Mecum Auctions held?

Headquartered in Walworth, Wisconsin, the Mecum Auction hosts the famous collector car auction in Kissimmee, Florida every year. In addition, it hosts other events throughout the United States. The Mecum Auction offers over 20,000 cars for sale annually.

It doesn’t matter which auction hosted by Mecum you pick. You will have a great experience! And who knows? You might even find the car of your dreams!

What is Mecum rule?

Every Mecum event is a world of opportunities, and no one wants to lose theirs. Dana Mecum understands it, so he established the rule – the Mecum rule. In some circumstances, particularly when the reserve isn’t met, Dana would ask the highest bidder to meet the reserve. Should the latter agree, the hammer falls, and the car is sold. No other bids would be accepted.

So these are the top 5 classic car auctions you must attend: in-person or via live streaming. And if you have never attended any such events before, these may be a great start.

How do you transport a car from an automotive auction?

For nearly a decade Corsia Logistics has been delivering vehicles across the US, and internationally, including collector and luxury cars. One of our specialties is working and shipping for auto auctions. We provide auction auto transport nationwide. Our logistics experts are ready to guide you through every step of the process, making sure your car is shipped safely and efficiently to a destination of your choice.

Browse our website for additional guides and facts. Request a quick car shipping quote, call or chat with us online now. We will explain how shipping a classic car works and what it costs. Thank you!