The automobile industry has been considered one of the most competitive business fields. If you want to join the players, you would first have to consider all the threats along the way. Large capital investments, R&D expenditures, economies of scale, network effects related to distribution or service are only some of the requirements that have kept new entrants out of the industry for decades. Only until Tesla showed up in the picture.

Tesla Motors has been one of the most talked about automakers in the past decade.

The company started from zero and had risen to the top places in rankings for best cars and among the most respected companies. All of this within a little more than ten years. Before that, companies like Toyota, Volkswagen, Ford and GM dominated the US market and led many to believe that the power these companies had could keep potential new entrants off the market. That did not scare Tesla.

During these seventeen years, Tesla has built a company with market capitalization worth more than Ford and General Motors combined.

So what is the key to Tesla’s success?

Entrepreneurship and Innovation vs. Economies of Scale

The environment in which the idea for Tesla was born is of immense significance to its development. The Silicon Valley is an area of entrepreneurship, which inspires unrestricted and dynamic changes in the markets. Companies that have come out of the Silicon Valley are not focused on the trends in a market or not even on what’s missing from the market. They work to create new markets instead.

Tesla’s CEO, Elon Musk, claimed that his work is driven by the vision of how things could be rather than how they are. This is why Tesla did not see the numerous barriers to get into the automobile industry as threats. There was only one obstacle in the way – the current market. Moreover, Elon Musk decided not to create analogies with current companies, but to create his own enterprise and make it serve as a reference to others.

The strategic approach Tesla took was to start with a minimum viable product – to create a high-end luxury electric vehicle marketed to only the few who could afford it.

What was Tesla’s initial plan?

The initial idea was to start with an expensive but low-volume car, which allowed them to enter the market with fewer resources. No new entrant can have the economies of scale necessary to take a new technology to the mass market so quickly. Shipping such an expensive EV, lets say from New York to California, requires a specialized care by a professional auto shipping company.

So, ultimately, the company relied on an easy entrance that guaranteed a position on the market. The Roadster set the start, and allowed Tesla to prove their initial success and raise the money required for the establishment of their Gigafactory.

It was the success from doing something that required low capital that helped Tesla realize bigger projects taking the company closer to accomplishing its mission.

What are some mind-blowing facts about Tesla Motors development?

In the beginning of production, back in the early 2000s, what Musk valued most was the acceptance of failure and the feedback loop. As a typical start-up, Tesla relied on the trial-error approach. Musk believed that no one can know everything from the start, especially without any prior experience in the automobile industry. But he believed that it is the company’s responsibility to err less. This is why he relied on opinions and feedback that would help his start-up continuously improve and upgrade its electric vehicles.

The primary driver behind Tesla’s success is the desire and need for innovation.

Elon Musk believes that sustainable energy is what will move the world forward. Until then, however, there is no solution or a way to achieve that. So in his mind, there is only one thing that could solve the issue, and that is innovation. According to Elon Musk, new entrants drive innovation.

In industries where there are no new entrants, it is very rare to see innovative measures. Companies undertake certain activities but only in the spectrum of what is obviously feasible or is already extant. A new entrant is what is needed to disrupt the status quo and bring innovation in the field, and Tesla delivered much-needed change with its new electric cars. Their first car, the Roadster, set a new standard for luxury cars and has drawn the attention to the potential electric vehicles hold for the future development of the automobile industry.

How did alliances contribute to Tesla’s success?

A typical model in economics is the learning curve – the belief that more knowledge comes with greater experience. Which Tesla didn’t have. Throughout the years, Tesla has been relying heavily on alliances that allowed the company to gain knowledge and leverage the expertise of other companies. Instead of having to create everything on its own, Tesla used the network and infrastructure of its alliances which helped the company increase productivity with fewer resources. Quite a master plan, isn’t it?

In the beginning, Tesla started a partnership with Lotus for its minimum viable product and had since built its own production facility.  Lotus promised to help Tesla with design, engineering, and technology and be the contract assembler of Tesla’s first vehicle. Considering the lack of automotive experience of Tesla’s founders, Lotus turned out to as a great help in regard to the structure and safety components of the first Tesla vehicles.

Since then Tesla has committed to partnerships with other companies such as Daimler, Panasonic, and Toyota.

In 2010, Panasonic invested $30 million in Tesla Motors and the two companies agreed to develop next-generation automotive-grade battery cells. Some of Tesla’s most talked about partnerships was the one with Toyota. In 2010, Toyota Motor Corporation invested $50 million in Tesla to acquire a 3 percent stake in the newest Silicon Valley automaker and sold Tesla an assembly plant in Freemont, California.

A network effect is present when the value of a product depends on how many other consumers use the product. It would not be beneficial to Tesla to produce electric cars without providing customers with places to charge their cars. This is why Tesla has realized the need to take care of customers’ experience journey.

One crucial part of the experience is the charging stations, which Tesla has been developing continuously for the past years. Tesla provided its customers with 120-V charging stations. Yet, then realized that the time it takes for a car to charge becomes a burden and decreases the value of their product. Thus, the company increased the network of its 240-V charging stations where it takes much shorter to charge up a car battery. As of March 2020, Tesla has built 16,103 stations worldwide that charge at zero marginal cost to the user.

Dealership and distribution form another barrier that Tesla faces. Incumbents in the automobile industry already have well-established networks of dealers and service partners. Despite being a new company, Tesla is quickly catching up with the big players in the industry. Currently, Tesla is also exploring creating autonomous self-drive vehicles, and also cobalt-free batteries for its upcoming models. Yet, are you wondering how to choose an EV, or how to ship it? You can always give us at Corsia Logistics a call or write to us and we would be happy to guide you through it.

What can we learn from Tesla-like start ups?

In 2014, Tesla made all their patents open to the public explaining that they want to encourage other firms to enter the field of electric vehicles. Tesla wanted to provide a platform which would boost the development of electric cars, and strengthen the position of Tesla itself. The open-source philosophy would bring many talented engineers to the field, which would again help Tesla move forward.

Acting like a startup is what distinguishes Tesla from all other companies in the automobile field. The strategic path that Tesla is taking has helped the company not only enter the market but also redefine competition and change the market structure. The start-up nature of the company and the entrepreneurial spirit of its founders have helped Tesla build up a powerful base for the development of a new niche in the already overcrowded market. What all market leaders should learn from this example is that startups should not be underrated, especially when it comes to the automobile industry. Moreover, that Tesla is here to stay. 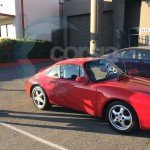