Moving from Los Angeles to Austin

In the last couple of decades, thousands of Americans have been consistently choosing Austin as their new home.

Therefore, if you are considering moving from Los Angeles to Austin sometime soon, know that the city will not disappoint. In fact, it will welcome you with open arms. Are you ready?

However, moving between cities, especially in different states, requires a good plan. You will have to get used to a new lifestyle and different weather, adjust to new culture and be open to make new friends, among other challenges.

To help you simplify your move and make this transition as seamless as possible, we’ll go over some of the major differences between Los Angeles and Austin. We will also give you an overview of what to expect once you become an Austenite. As a bonus, we will share a few tips on how you can move to Austin with a car.

What are the major differences between Los Angeles and Austin?

Unlike Los Angeles, most people move to Austin when they are ready to raise a family, start a company, grow a startup. Or whenever they are looking for a city that offers a balanced lifestyle.

While the startup scene is becoming more and more prominent in Los Angeles, the main reason driving people to L.A. is its film industry. If you are not looking to break into movie-making any time soon and prefer a place that is not centered around entertainment, TV shows, Hollywood, and Silicon Beach, Austin is where you want to be.

Austin’s affordable housing and cost of living might be two of the main reasons why hundreds of people move from Los Angeles to Austin every day. Add here the fact that you don’t have to pay any state income taxes in Texas and you get the idea.

Anxious to leave the L.A. traffic behind and stop focusing a big part of your day around this issue? Unfortunately, Austin is not much different. While traffic jams are not as bad as in L.A. (at least most Austinites don’t have to leave for work two hours earlier to avoid traffic jams), it’s not something you will look forward to. Keep expanding your audio book library.

When it comes to food, everyone’s tastes are different. Some prefer LA-flavored cuisine, others will fully embrace Austin’s food scene. Some say barbecue is better in Austin and Mexican food is better in L.A.. It will be up to you to judge once you move. But unlike traffic jams, Austin’s cuisine should be something to look forward to, especially if you are keen to try new flavors. Get ready – your next culinary adventure awaits.

“Hotter than hell” is not just a hit song by Dua Lipa. It’s how they refer to Austin’s weather. Some even joke that there are only two seasons in Austin: Summer and Christmas. Jokes aside, Austinites take pride in their “hotter than hell” weather. It may take some time to get used to the new climate, but a lot of people prefer Austin’s weather. Who knows? You might join the club and become one of those people as well.

How to ship my car from Los Angeles to Austin?

Unless you plan to live in any of the central neighborhoods, you will need a car. Especially, if you like to venture out and explore. An occasional weekend trip will be much easier to plan if you already have a vehicle. Now, all you need to figure out is how to ship your car to Austin from LA safely and efficiently.

Shipping your car from Los Angeles to Austin is simple once you partner with a reliable auto transporter.

If you’ve never shipped a car before, don’t worry. Research and arm yourself with information, read online reviews, and check with friends. Get in touch with potential car shippers and ask questions.

Requesting a few quotes will also allow you to compare the prices and services and help you make an informed decision.

Our expert team of vehicle relocation managers will assist you in selecting the best car shipping option for your needs. Take advantage of our years of auto transport experience – we have all it takes to deliver your car with peace of mind. 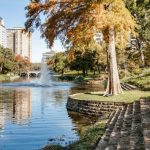