Love for the BMW Isetta Rekindled 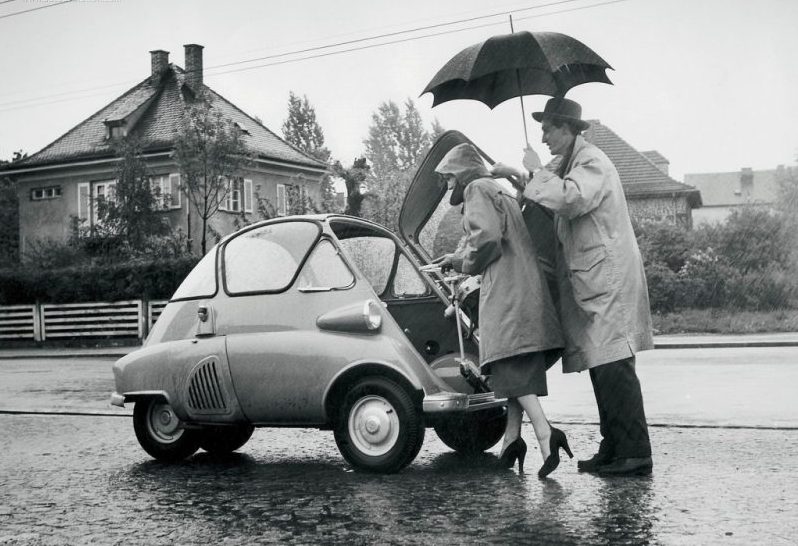 Once upon a time there was a little bubble car that won the hearts of many. With its cutesy shape and tiny body it put a dent in history. Sadly though, there came a time when the cute Isetta was too small for its own good. Slowly, but surely it went away and the generations forgot about it. Until now!

The Bubble car – the minicar of the past that rocked the auto industry is coming back as an electric vehicle! What could be a more contemporary form than that?

Because of the exciting news, we thought it would be fitting to cover this precious car in more detail. Want to see what the Isetta is all about?

The history of BMW Isetta

The egg-shaped microcar of only 7.5 ft long by 4.5 ft wide was the tiniest vehicle of its time. It even got its nickname “bubble car” because of its shape and size.

It was first designed in 1952 by Ermenegildo Preti and Pierluigi Raggi for Renzo Rivolta, the owner of Iso SpA. At the time the company was producing refrigerators, motor scooters, and small three-wheel trucks. However, the owner wanted a small car for mass distribution. And so “Little Iso” was born. In 1953, the auto world met Isetta, and it was an instant sensation.

The most unusual thing about the Isetta was that one had to enter the car through the front windscreen! The entire front door would swing up and out of the way, taking the steering wheel with it. Besides that many know the Isetta as the first production car that used less than 3 liters of gasoline for every 100 kilometers. Even with modern technology such fuel efficiency barely possible for current cars!

In the late 1950s, Isetta was the top-selling single-cylinder car in the world with over 167,000 units sold. It peaked from 10,500 units sold in 1955 to more than double a year later. However, by the early 1960s, the vehicle started losing elements of its original design. It now used larger BMW engines and push-buttons instead of handles.

When BMW took the entire control of the Isetta production, the German automaker re-engineered so much of the car that none of the parts between the BMW Isetta Moto Coupe and an original Iso Isetta were interchangeable. Soon, the production of the Isetta ceased entirely.

Microlino – The spiritual successor to the Isetta

Luckily, Little Iso has a chance to return again! The Swiss electric scooter manufacturer Micro has decided to re-introduce the Isetta as a modern electric car. The vehicle would enjoy its comeback under a new name – the Microlino. Similarly to the original model, this one features the same side-hinged front door and slide away steering column.The vehicle is powered by a 12 kW electric motor, which can reach the maximum speed of 54 mph and a range of about 80 miles.

The automakers introduced the contemporary version of the Isetta to the public in Geneva in March of 2016. Its production version was shown in 2018. Though they still struggle with figuring out the manufacturing, test units are now available.

Hey, did you know that Isetta was not the only small car that changed a company’s history? Check this article out: Peugeot 205 – the car that saved the brand!