Is car reliability a myth?

A myth, really? If you ask me a car is either reliable or not, period. Or that’s what I thought. The more I thought about it, the more it hit me that yes a car’s reliability is heavily dependent on the manufacturer and of course on what you pay for it, however, if a car is well maintained it will stay reliable for long time. Confused? Not to worry, keep on reading.

As I’ve told you before, I used to have an adorable Honda Civic LX 2005, well technically it was my husband’s. He got it before we met and by the time we got married, it was already mine to take care of…not that I did much to be honest. He was the one making sure the car is in perfect driving condition (if you ask me he was getting it ready for an exhibition each time).

On average, of two times per week, my lovely husband would take the car to the car wash and clean it inside and out (and I mean it!) – seats, under the seats, engine, lights, tires, any tiny little hole that you can think of – he got it! Not to mention all the hand drying, polishing and spraying the car and tires have seen; seriously he was treating it with more products than me when I put make up on!

The reason why I wasn’t objecting to the hours spent in the carwash is because of the way the car looked and felt. He always made sure the car has fresh oil in it and that it has regular tune ups, something I couldn’t be bothered about. In 2014, our nine year old car looked amazing and drove better than newer cars. True, it had only 82 000 miles on it, but this is also thanks to my husband who would always rent a car for a trip longer than 200 miles.

When the time came to move, hence – sell it, the buyer couldn’t believe his eyes, so we took the car to a mechanic for a checkup. The mechanic was speechless and actually offered to buy it because of the immaculate condition of the car and the engine. Long story short, even though Honda vehicles are normally considered reliable, when taken care of, they can not only last longer but stay as reliable as they were when you bought them.

So, what exactly is reliability?

For me it was the fact that the car will start when I turn it on in the morning, turns out it is a little more complicated than that. There are seventeen check points that the Consumer Reports Organization explores each year, in order to give us a concise list of brands and makes that are reliable. And yes, you read it right -17!

The trouble spots start from minor engine issues, such as oil leaks, accessory belts, radiator, cooling fanand goes through the transmission (and clutch), drive and fuel system, all the way to the body integrity, paint/trim and audio system. It is amazing on how many points your car can fall short on, even when you think it is reliable; you don’t have to take it to the shop every month, but when the paint starts peeling off – guess what, a point was just taken off.

When it comes to new cars’ reliability, you really need to check out the reports before you by one in order to know what you get yourself into. It is simple and if the manufacturer has proven itself, then you know what to expect. For instance, the report for most and least reliable cars of 2015 can give you a good indication on what to look for. Consumer Reports conducts a survey on over 1 million vehicles each year, analyzing the trouble spots we mentioned above, based on the experience that the car owners have had over the last 12 months.

Based on the results from this report of 2014, the most reliable car for 2015 is Lexus, even its mother company – Toyota scored second. The luxury line of Toyota has been continuously ranking among the vehicles with above average reliability rates. Toyota has over 26 models that have ranked with above average reliability rate, not 3, not 4, but 26! So yes, you know that when you get a Toyota (and especially a Lexus that after all you pay a premium for), it will last you for a good while; but even that should not be taken for granted.

Imagine this, you have a Lexus that has 140 000 miles on it and you have never ever been taking care of it properly – no regular oil changes, tune ups, tire rotation, keeping track of the air pressure of the tires, etc. After these 140 000 miles on, the car finally gives in and is ready to go. You might say that 140 000 miles is nothing for a Lexus and you would be right, however a Fiat, for instance, that has ranked as the least reliable car on the 2014 Consumer Report ranking, would have given up long before it reaches the 100 000 miles if you were not treating it correctly.

In the report some of the brands, such as GM has improved their reliability rankings and are now considered as the most reliable American brand out there. Of course, they still have their short comings with the Silverado and the GMC Sierra pickups that are still considered not reliable. Ford has shown some improvement and is going up the reliability ladder now the Fusion and Explorer are considered reliable.

Surprisingly, KIA is doing well, even better than its sister company – Hyundai. It could be due to the fact that somehow Hyundai gets to try the new outfit and KIA gets the improved version after that. On the other side, Nissan has been moving down the ladder, and even their luxury line Infinity didn’t do well in the report.

Tesla, as many others, has been having a lot of problems with its Infotaiming System; which brings its reliability down to average, but it is still recommended by Consumer Reports. Mercedec Benz has dropped down with its redesigned S Class and its entry level CLA Sedan. The CLA Sedan was released with lower price and the performance of the car proves that nothing good comes cheap.

Fiat has proven to be the least reliable brand, the Fiat 500L is the winner in this category.

Surprisingly, we hear about more and more recalls of vehicles each year. One of the biggest recalls due to brakes failure a few years ago was Toyota, which at the same time has been on the list of the most reliable vehicles for over 20 years.

Now, how reliable are the reliability reports?

According to www.recalls.gov, as of Feb. 3rd, 2015 a quite big group of cars and trucks have been recalled. Here is a small representation of the makes involved: Acura, Pontiac, Toyota Corolla, Jeep Liberty, Honda Odyssey, Dodge, Volkswagen Jetta, Autocar Xpeditor Trucks, Porche Cayenne Hybrid and Panamera Hybrid. Many of these manufacturers are considered reliable, but does a recall make them unreliable or on the contrary?

In my opinion, a company proves its reliability on the way it reacts when there is a problem that was not expected. For instance, Toyota’s 2009 – 2011 recall of vehicles with problematic brakes has increased my trust in the company rather than the contrary, simply because of the fast response that they provided.

On the other side, General Motors’ Ignition Switch recall was/is so painful to watch. Things had to get ugly for them to respond to the situation and admit liability. Regardless of whether the problem was known or not, the way the recall had to happen actually proved how unreliable GM can be. Is profit more important than causing a car accident?

How about the reliability rate of used cars?

Are you aiming to get the most out of your money and avoid some rapid initial depreciation that comes with a new car? Then you should definitely consider the reliability of a used car.

One thing that you want to take a look at is the brands reliability of certain model over the last 10 years. It will give you an indication of what to expect from the car itself, before including the owner’s factor. Checking out the trouble spots history is always beneficial and not to mention the CarFax. It still wouldn’t hurt to have it checked out before you buy a used car, just to make sure that you are putting your money in the right place.

If you have gone through everything mentioned above, and the car you are about to buy is just as great as our Honda Civic, then I would say – GO FOR IT! It will hold its price better than a new car and it has already proven its reliability over the years (something you simply can’t get with a new car on the market).

Don’t know how to maintain your car and prolong its life? Not to worry, we’re here to help!

Now, I think that how well you maintain your car will actually tell whether you are a car guy or not. Do you take care of your car? What are your secrets about extending the longevity of your vehicle? Please, share your thoughts, your stories and your advice!

Pingback: Girls' garage... what do you think that is? 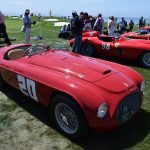