The Wonder Women of automotive

Women have made a lot of history helping to keep this world on the move. But all too often they fall through the gaps of history and their stories remain untold or little-known.

So this March, we are calling a few Wonder Women to the front line and spotlighting their achievements in the history of mobility. Because you deserve to know their names and stories and learn how they revolutionized the world of driving.

This Women’s History Month, let’s pause for a moment and allow ourselves to revel in learning about the amazing females – the automotive history makers.

Today, sticking to your lane while driving only feels natural. These road markings are meant to keep traffic in order and safe. In fact, the dividing lines are so intrinsic to our roads that it’s hard to imagine they weren’t always there. All roads have them unless you venture into an unpaved territory. But have you ever wondered how these dividing road markings came to be?

For this ingenious and, at the same time, simple idea we have June McCarroll to thank. She was a Southern Pacific Railroad nurse, and later a physician. One day, in 1917, the unsuspecting woman was driving to her office near Indio, California. When suddenly a truck forced her off the road.

As McCarroll recalled years later: “My Model T Ford and I found ourselves face to face with a truck on the paved highway. It did not take me long to choose between a sandy berth to the right and a ten-ton truck to the left! Then I had my idea of a white line painted down the center of the highways of the country as a safety measure.”

Unfortunately, her brilliant idea was just as brilliantly ignored by the members of the local chamber of commerce and the Riverside County Board Supervisors. Determined to bring her plan to fruition McCarroll armed herself with a brush and painted a white line down the middle of the road herself.

She then undertook a relentless letter-writing campaign through The Indio Women’s Club and similar organizations, advocating for her idea. And finally, in 1924, the dividing line became law in California and 3,500 miles of roads were delineated.

And although there will always be those supporting the competing claim for the authorship of a “line-down-the-middle-of-the-road”, McCarroll’s efforts to make the road markings mandatory in her home state (and indirectly in the rest of the world) are undeniable.

She was the first woman in all of California to have drawn the line, so other drivers, men and women, felt safer behind the wheel.

Imagine driving along as heavy water droplets begin to hit the windshield. Before the outside world blurs out of visibility, your hand reaches for the small lever right next to the steering wheel, activating the windshield wipers.

Today, it’s hard to imagine a car that doesn’t have this safety device. But in Mary Anderson’s world windshield wipers were unheard of, until one day…

In winter of 1902, Anderson was riding a streetcar in New York City. It was snowing heavily, and as a result, the visibility was poor.

To clear the sight lines, the driver had two options. First – to shove one of the window panels aside, thus exposing himself and the front passengers to weather. Second – to continuously stop the streetcar, get out, and wipe off the windshield. Neither of the two alternatives was very driver and passenger-friendly, to say the least.

During that exact ride, Mary Anderson had her eureka moment. What if there were a device that could wipe off the windshield, making trolley rides more enjoyable and safe? Thus, the idea of a windshield wiper was born.

In 1903, Anderson patented her invention and in 1905 tried to sell it to a noted Canadian firm of Dinning and Eckenstein. Unsuccessfully. The manufacturer’s response stated that they didn’t find the device to “be of such commercial value as would warrant our undertaking its sale.”

In 1922, Cadillac became the first car manufacturer to take up the device and make it a standard feature in all their automobiles. By that time, the inventor’s patent had expired. Mary Anderson didn’t get the laurels, nor did she receive any monetary compensation for her “window cleaning device.” But she lived long enough to see her invention become universal. And finally, in 2014, her name was inducted in the National Inventors Hall of Fame.

Since logistics is our domain, we couldn’t bypass the pioneer of female trucking – Lillie Elizabeth McGee Drennan.

In 1928, Lillie and her then-husband established Drennan Truck Line. The following year their marriage had fallen apart and the woman became the sole owner of the trucking company.

As she applied for the commercial truck driver’s license, Lillie had to prove her worth as a safe and capable truck operator. The examiners were quite reluctant about granting the license to a female candidate, but Lillie wouldn’t budge. She had a spotless driving record, unstained by accidents or violations: “If any man can beat my record I’ll just get out of here.”

Drennan managed her trucking enterprise for almost twenty-four years, proving to the world that a woman can successfully thrive in a male-dominated business. But Lillie Drennan was more than the first female truck driver and successful entrepreneur. During WWII, she inspired other women to follow in her steps and get behind the wheel, driving for the quartermaster corps.

The first wonder woman of the trucking industry, the dry land Tugboat Annie, she paved the way for the better half of humanity in a male-dominated field showing all women that if she could do it, any woman could, too.

Another female trailblazer whose name is not on everyone’s tongue. In the 1940s, when the Alaska Highway was in its beginnings, a woman was a rare sight on the construction grounds. Unless her name was Rusty Dow.

In 1934, a Texas native, Benzie Ola “Rusty” then-Scott moved to Alaska, where she became Mrs. Dow. During the WWII she took on a job as a truck driver, working with the U.S. army engineers in the Alaska Defense Command. “Rusty, with the kindly blue eyes and the unruly red hair and the khaki coveralls” was recognized as “a woman who actually does a man’s job in this war”.

Dow had a bucket list of dreams and one was driving over the ALCAN Highway. In June 1944, she got her chance. Rusty was the first woman to have traversed the entire length of the Highway in a 10-wheel Studebaker 6×6 truck. She was fifty years old at that time.

Dow covered about 200 miles per day in a truck, “temperamental as a wolverine after a long winter”, loaded with five tons of cement. The vehicle had no speedometer, the gas gauge was missing as well, and tires were as bold as can be. On top of all that, the woman had to use a stick to measure the fuel level in the 40-gallon tank.

Despite adverse road conditions and an omnipresent doubt that a woman could do “a man’s job on a man’s road”, Rusty, “a real sourdough”, made the 1532 miles in seven days. After the trip, she described ALCAN as “a beautiful highway”, “a picture of what American people can do when they have to”.

These are just a few Wonder Women in the automotive history, role models we could look up to. They all came from different walks of life but had one thing in common – they all wanted to make a difference.

On many the occasion, they proved their ability to problem solve, create, lead, and inspire, busting myths about what women can’t do. These brilliant and totally rad females followed their hearts in doing what they believed was right, proving to the world what was possible.

Today, opportunities for women are infinitely numerous. The automotive world ceased to be an exclusively male domain. Women have shown as much love and understanding of cars as their male counterparts. It’s not that uncommon to see a female trucker as more women are taking the wheel of a big rig, delivering cargo on par with men.

New and emerging technologies have made the car industry and logistics so much more than just brute force and mobility. Today, it’s about marketing and human connections. And by essence women are known to be more sensitive and have higher emotional intelligence. Inquisitive by nature, most women are good at making things appealing and building bridges.

We are hearing more often about women taking leadership positions. Take, for example, GM’s Mary Barra – the auto industry’s first female CEO, Trudy Hardy – marketing vice president at BMW of North America, or Michelle Christensen who was the first woman to have led a supercar exterior design team at Acura.

Let’s inspire each other, get out there, and create our history. Take initiative: the stage, or should I say, the road, is yours! Stay true to yourself, use the momentum, be daring. Let’s use our female power to bring a fresh perspective to a male-dominated field. 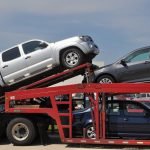 Cost to ship a car: Do I get a tax deduction? Prev post
What factors affect your SUV shipping cost? Next post 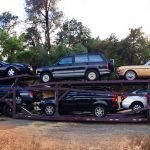