How much more can we take, air pollution that is?

If you are a fan of horror books or movies, you might find it interesting to take a look at the long list of the health effects of vehicle air pollution. Automobile emissions cause acute respiratory problems and temporary decreases in lung capacity, they impair the body’s immune system and reduce the release of oxygen to body tissues.

Moreover, vehicle air pollution increases the risk of cancer-related death and contributes to birth defects and infant deaths, and increases the likelihood of a child getting asthma up to four times… To cut it short, your car is constantly contributing to making healthy individuals more likely to get sick.

As soon as you start the engine of your car, pollutants such as carbon mono- and dioxide, nitrogen and Sulfur oxides, and other particulate matter enter the atmosphere. The EPA estimates that solely particulate pollution kills more than 60,000 people per year!

How much more air pollution can we take?

These pollutants not only harm our bodies, but they also harm the environment. According to the EPA, driving a private car is a typical citizen’s “most polluting daily activity”. As soon as the exhaust leaves the tailpipe, it reacts with the sunlight and leads to an increase in the amounts of ozone on ground level, leading to disruptions in climate. Particulate matter creates harm to biodiversity in ecosystems, damaging soil, forests and crops.

It is obvious that the energy and transportation choices we make on a daily basis influence air quality, climate change, and our own health. So why do we keep doing this to ourselves and our planet? How long will the Earth be able to handle all the pressure we put on it before it finally breaks down?

This has been the concern for many researchers throughout the past decades. Today, however, it has become a concern of vehicle manufacturers as well.

We can see how the automobile industry is changing due to the environmental regulations the government sets and the customers’ preferences for sustainability. Numerous automobile manufacturers have started developing sustainability plans and energy efficiency goals to be achieved by the year 2020.

There has been an ongoing fierce race to develop and produce electric vehicles – a trend encouraged by both customer demand and government incentives. According to another survey by Deloitte, a third of all cars purchased in developed countries in 2020 will not be propelled by an internal combustion engine.

In addition to manufacturers, consumers of the automobile industry are also in constant efforts to adapt their buying behavior and usage habits in order to reduce the harm to the environment.

Individuals are turning to alternative sources of energy and new types of engines. According to Deloitte, the hybrid electric is the predominant choice for Gen Y in the U.S., Germany, Japan, China and Brazil, but compressed natural gas is the top choice in India. Among developed countries, a majority of Gen Y expect to be driving an alternative fuel vehicle in the next five years. In its annual Global Automotive Executive Survey for 2014, KPMG conducted a research among customers which showed that fuel efficiency and environmental friendliness are two of the top five factors most likely to influence a purchasing decision.

Today, Generation Y consumers let their lifestyle choices influence their automobile purchase decisions even to a greater extent. In developed countries, youngsters would rather live in areas where the primary way of getting to places is indeed walking. Not only that, but over half of all consumers worldwide prefer to have everything within walking distance. This way they will not only decrease their household expenses, when fuel is out of the picture, but they will also save a couple of trees and will see fewer people wearing face masks in the streets.

There are other little habits that you can include in your daily routine in order to protect the environment from further vehicle pollution. The greatest impact can be made when you cut back on your fuel. The less gasoline and diesel you burn, the lower effect your driving will have on the environment. You might want to check out some alternative options, like biofuel as well. And don’t forget that in addition to saving the environment, less fuel consumption will do well to your wallet, too!

Green driving can be yet another reason for you to change you poor driving habits (hopefully, this time with better results). According to the EPA, speeding, accelerating and braking hard can deplete fuel efficiency by 33 percent. The more often you speed up and down, the more fuel you use up, thus, the more often you have to stop again… to get more gas. If you drive more slowly next time, your fuel will last longer.

If you are in the process of buying a car, research your options on sustainable characteristics of the vehicle such as the type of engine and the fuel efficiency. The EPA can help you to make a smarter choice by looking at its Green Vehicle Guide.

You might as well consider possibilities such as car sharing and… why not the public transport? According to the Public Transport Authority in Australia, the greenhouse gas emissions from public transport are one third of the emissions generated by private automobiles. Imagine 100 people with their personal cars compared to one single bus. It might seem relatively the same to you, but every vehicle makes a difference to the Earth and to air we breathe. We have to note, however, that it is very unfortunate that many cities in the US do not have sufficient public transport system.

We only have one planet to live on, so we’d better keep it healthy until we can. Being stuck in the grey daily routine is never an excuse for not caring. Hit the brakes and think about the options you have to keep the Earth, yourself and the others around you in good shape and health! 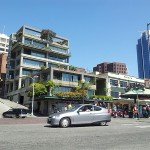