The Greatness of Porsche and How to Ship One

What car can serve both as a daily driver and a weekend fun ride? Which make can both excite you and be practical at the same time? If we had to pick one, it would probably be a Porsche!

Say what you will about this luxury brand name, but you cannot deny they build special vehicles. Somehow they have maintained their spirit throughout the years, both in performance and in appearance.

Nowadays, Porsche is more than just a sports car. It offers experience that could make every person wish for more. Let us explore some history, and then see how shipping a Porsche works.

What is the history of Porsche?

We should start by saying that the marque has over 70 years of family tradition. One of the distinguishable characteristics that make the history of Porsche so great is the interlinkage between the company and the family itself. The founder – Ferdinand Porsche – had the mind of an engineering genius. Do you know who designed the first Volkswagen Beetle? He, indeed!

Through cooperation and innovation came the development of the first lightweight sports cars that could nevertheless fit high horsepower engines. From then on, Porsche became synonymous with racing. Today, their cars have won over 24,000 auto races all over the world.

Even so, we have to give credit to the young Porsche, Ferry, who led the company to growth. He had a set of criteria for his ideal sports car. Guess what though: none could meet them. So, just like any other modern entrepreneur, he decided to build one himself. With the very first Porsche sports car, the 356 model, he set the start of Porsche’s great future.

What is the best Porsche model?

Throughout the years Porsche have come up with plenty of iconic cars. Nevertheless, 911 became their most important model in history. In a little over 50 years, the 911 has grown to be an icon of German design and engineering. Today, it is one of the most recognizable vehicles in the world.

In 2012, Porsche 911 earned the title of The World Performance Car. Its top speed has increased by 75 mph since its inception and now reaches 205 mph. Yet, the silhouette and the distinctive shape have remained almost exactly the same.

Each Porsche model combines both skill and talent, making it an engineering masterpiece and a piece of art at the same time. One of Porsche’s main principles is that “design always follows function”. Thus the design cannot be the end in and of itself. It should stand up to tests and continuously tightening requirements before it becomes a genuine Porsche.

The company engineers make it sound almost like the design is a bonus rather than a key feature of the brand. Yet, we recognize a Porsche the moment we see it. That becomes even clearer with the 911, which many consider magic incarnate!

We do not know how Porsche managed to build such a loyal fanbase of admirers. Many luxury car enthusiasts who buy Porsche once, remain loyal to the brand for their entire lives. In fact, since the cars also have value as classic, you can see generations of people sharing their love for Porsche.

Perhaps we should look at what the marque stands for. One of the most exquisite elements of the Porsche lifestyle is the brand’s crest. Do you know what it represents? The city of Stuttgart, which was founded on a stud farm. For this reason, the horse adorns the foreground of the emblem.

Initially, there was no symbol on Porsche’s cars, only the automaker’s name. It was in 1951 when the Porsche distributor in the USA suggested the company needed a symbol or a mascot that would make it stand out. Now it has become iconic in its own right!

Ultimately, owning a Porsche gives you a sense of freedom. You can be a sports car fan, and still enjoy comfort. You can drive a Porsche around town for practical tasks or use it for special occasions. And throughout all that you will be enjoying the special legacy of the marque!

How to ship a Porsche?

The entire process of shipping your Porsche starts with doing some research. To be more specific, you have to find reputable auto transport companies, which have experience in transporting sports cars. It all starts online, and usually on the first page of Google Search, but it should not end there.

Corsia Logistics has experience in shipping high-end automobiles and we offer white-glove auto transport service for any Porsche.

We have transported hundreds of Porsche models over the years. Owners of such vehicles usually pick enclosed car carriers, yet sometimes they opt for open transport. If you do not understand those terms, let us explain.

Open transport carriers are the most common in the US, which also makes them cheaper. People use them on a regular basis and you have probably seen them on the interstate. They can carry up to 10 cars, most commonly on two decks. They have one main problem for sports car owners: they do not protect the car from road debris, dirt, dust or weather conditions.

This is the reason owners of luxury cars choose enclosed trailers. While a bit more expensive, they keep your car in pristine condition. You will not receive it covered in dust from the road in need of a serious wash. Plus, you will have peace of mind that your car is traveling safe and sound. For these reasons we most often we advise owners of classic and luxury cars to book enclosed carrier.

If you are looking to ship your Porsche, we are always available online to help you out. Should you have any questions, our team can answer them at all time online and during business hours on the phone. Thank you!

The 365 was a game changer. At the time, it was the greatest car ever built. 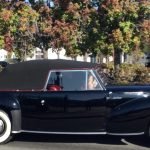