Do you know what people love the most? Stories. Stories make us human. We love hearing about great characters, tough circumstances, and thrilling conclusions.

Well, what if I told you that the character in today’s spotlight is not human at all? In fact, it is a car. And I do not mean one of those Disney animations for children. I have in mind a truly badass, out-of-this-world, gone-through-everything kind of vehicle. One that has already become a legend.

Enter Rusty Slammington! This car has been killed, brought back to life, disassembled, and put back together more times than you would think possible. This is a story about a beaten-up vehicle and the person that made it see the light of day.

Corsia Logistics had the pleasure of transporting this legendary car to the BMW Car Club of America Foundation for an exhibition. It looked so interesting that I was inspired to tell Rusty’s story. Hold fast, because this car is a rather mean one!

What are the origins of Rusty Slammington? 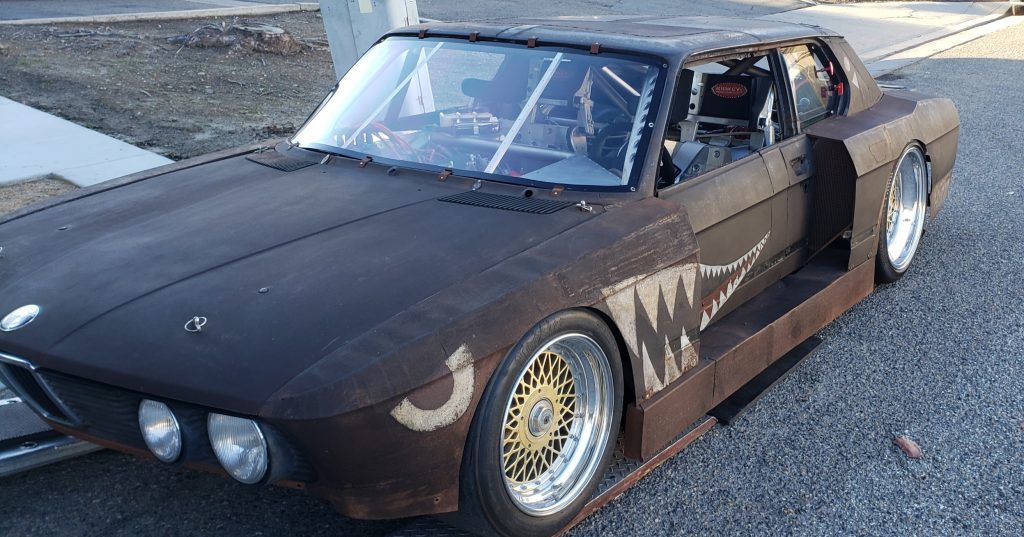 Once upon a time, there was a useless old car. There it laid, in 2010, a BMW E28 close to being forgotten, making friends with rust and dust alone. All the remnants of its past glory had simply faded. Even corrosion seemed to have little work left – it was already eating at the dashboard.

One day Rusty’s owner, Mike Burroughs, took a glance at the old thing and something caught his attention. The E28 was crying out its last laments. A decision had to be made – either take it to the scrapyard or… Or what? Could this piece of corroded metal actually be saved? Was it even worth it?

Perhaps most people would have given it up. They would have put the BMW out of its misery, but that was not Mike Burroughs’ style. After all, he was (and still is) one of the minds behind StanceWorks – a company all about turning cars into art on wheels.

So on that fateful day, Mike made the call. The sad old E28 was not going to die. In fact, its life was just about to begin.

What does it take to restore an old car?

If you do not know much about car reworks, you may not realize how much effort goes into them. Car enthusiasts have to pour their heart and soul into to job. It requires not only mechanical skill but an artistic touch as well. Plus, each case requires a unique approach.

However, the resurrection of the old BMW E28 was not a job – it was a passion project. Mike Burroughs did not see a goldmine in it, but a friend that needed help: a special kind of challenge.

For about a month the car received nonstop attention. Burroughs went in and out of bed with the idea of turning his rust box into a flaming chariot. He did numerous modifications and finally, a masterpiece emerged.

Here are just some of the mods Mike did to the car:

The last decision was not welcomed by everyone. Some people think it is rather sacrilegious to put a Japanese engine into a German car. Thankfully, Mike Burroughs did not care about that. With the Supra’s engine, Rusty can voice its angry opinion quite well – and it supports Mike’s choice.

With all that said, we have to mention one thing. Such a job would usually not be worth it. If you are wondering that you can restore a car to life and earn a lot out of it, think again. To learn why, check this out: Is this classic worth restoring?

Now I bet you are wondering something. How is this a legendary vehicle, and not just another rework? Well, as with any good tale, the real trouble is just about to hit!

How did the good ol’ Rusty claim the legendary status?

Everything was looking great for good ol’ Rusty. While the car was not everyone’s cup of tea, people appreciated the dedication of Burroughs. It quickly got some fans, as well as people who were just interested in what was coming next. Sadly, things went seriously downhill.

Just a year after being revived, Rusty burned up in a fire in 2011. And when I say burned, I mean it. The only thing left was the metal frame. It stood as the last testament to Rusty’s unyielding heart.

Tragic? Yes. Hopeless? Not quite! Mike Burroughs and company were not about to give up on the old BMW. Encouraged by fans, they decided to bring the car back to life once more. In their eyes, Rusty was a phoenix. Burning up was just a part of its reincarnation.

However, this time around, things were much more difficult. They had to essentially construct a whole new vehicle around a simple steel frame. Mike Burroughs actually considered a complete redo for old Rusty even before the fire. Fate just sped things up! So the real work began…

Rusty Slammington – How did it evolve through the years?

How does it sound to build a car from scratch? Because that is what Burroughs had to learn how to do.

He started from an interesting place – the wheels. In his mind, Rusty was built around them, rather than using the wheels as an accessory. Just to note, the current wheels were pieced together from Brun Motorsport Porsche 962. They had seen races and carried a spirit of their own.

Throughout the rebuild, somehow Mike managed to keep the authentic look of the BMW while modifying pretty much everything about its body.

Now the vehicle is wider, yet it still stares at you with aggressive round eyes. The black coat carries “tattoos” as a reminder that you are not dealing with any regular old BMW.

Ladies and gentlemen, this is Rusty Slammington – the car that died, lived, died again, and rose anew once more. It took 8 years, but now it is here!

What do you think about old Rusty?

I have a soft spot in my heart for this vehicle. To be honest, such cars are not usually what I would go for, but its story resonates with me. The value it carries goes beyond simple aesthetics or vehicle details.

But how do you feel about it? Is it a car you would like to see with your own eyes? Do you find its story captivating? If you do, I have another interesting thing for you. Have you heard of car mashups? Check out this special thing: Jeep Corvette CJ-Z06!

And If you have any auto transport-related questions, feel free to call us at (818) 850-5258 or drop us a line via our online chat. Our dedicated team of logistics experts will answer your questions. We look forward to serving your auto shipping needs. Thank you.

Shipping your car vs towing it Prev post
Cost to ship a car: Do I get a tax deduction? Next post