Shipping a car from New York to Tennessee

How much does it cost to ship a car from New York to Tennessee?

How long does it take to ship a car from New York to Tennessee?

Shipping a car from New York to Tennessee takes about 3 to 5 days. Various factors could affect the shipping times and this means that shipping time is always an estimate. Open auto transport is usually faster and cheaper due to high availability.

Choosing a carrier type really depends on the type of vehicle you need to ship. Standard everyday sedans, such as a Ford Focus or Nissan Altima usually go on an open-air trailer. If you need to ship a high-end sports or luxury automobile, or any classic vehicle you should choose enclosed trailer.

Domestic transport is easy. When shipping a car from New York to Tennessee, you or someone on your behalf must release the vehicle to the carrier at pick-up.

From New York to Tennessee

New York is one of the most famous cities in the world. And the state itself can certainly compete. It offers lakes, mountains and coastal line. Overall New York state is beautiful and huge. Aside, from New York City it has everything for the outdoor lovers, as well as the city dwellers.

A global cultural and economic hub, many move to New York for a better-paid job, educational opportunities, or for the entertainment. New York is the largest city in the US with a population of nearly 9 million, spread in five boroughs – Brooklyn, Queens, Manhattan, Bronx, and Staten Island. The city is also a global business, commerce, and financial center. Wall Street is all we need to mention.

New York has several huge, well-developed parks. Probably the most-famous is Central Park. It has an excellent infrastructure for both walking and biking, as well as events. You can reach every major landmark in Central Park on a bike (and there are quite a few!), and you can check The Loop – a full lap around the park, if you’re an avid biker. If you want to head out of for a bike ride outside Central Park, then check Ocean Parkway Bike Path, Bronx River Pathway, Wards Island Bike Path, and Pulaski to Williamsburg Bridge.

They say the neon lights are bright on Broadway! Broadway is the biggest, most-star-studded musical theater stage in the US, rivaled only by West End in the UK! Composed of 41 large theaters with capacity over 500 seats, this venue accommodate both musical evergreens and top-notch modern classics.

New York is home of some global sports brands with millions of fans, both in town and all over the world. The New York Knicks and the Brooklyn Nets in NBA, the Jets and the Giants, and NYRB and New York City FC in the MLS draw the attention of the fans.

These teams play in masterpiece venues like the MetLife Stadium, Madison Square Garden, and the Barclays Center.

Traffic, crime rate, pollution, overpopulation, these are just a few of the cons of living in New York City.

Rise in homelessness and mental illness 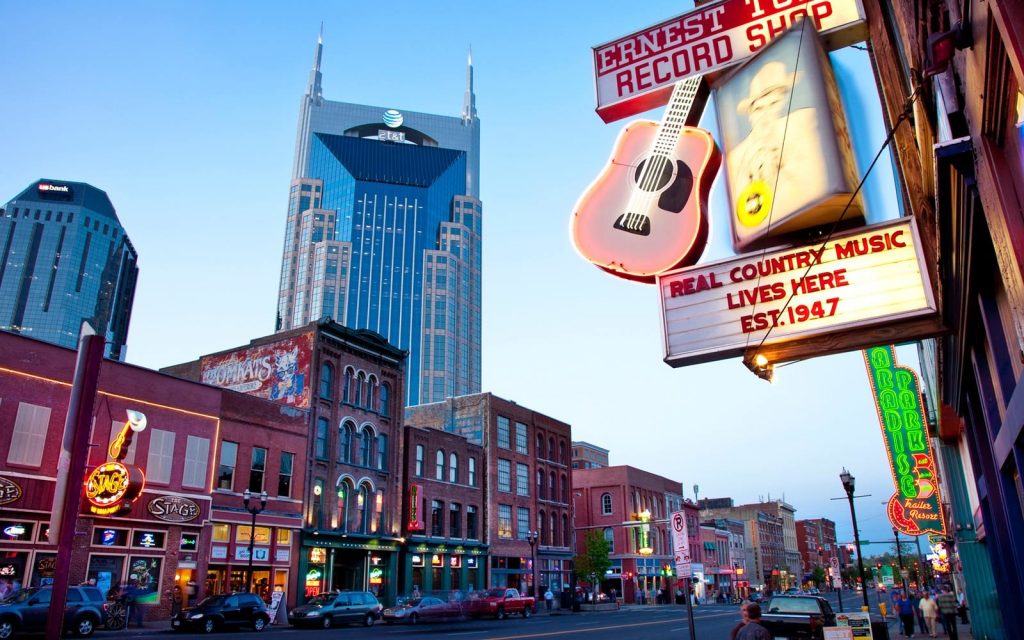 Nashville is the capital and the largest city of Tennessee, with a population of 689,447. Due to its key location on the Cumberland River, Nashville became prosperous and important.

Nashville is called the city of music for good reason. At the beginning of the 20th century, Jefferson Street became a popular destination for jazz and blues musicians throughout the United States, and it gained fame as a result.

Nashville is also home to the Country Music Hall of Fame and Museum, as well as countless high-profile musicians such as Johnny Cash, Miley Cyrus and the entire Cyrus family, Dolly Parton and more!

Music is the backbone of Tennessee entertainment. Country music has a fanatical status, and cult venues such as the Country Music Hall of Fame and Museum, Belcourt Theatre and Lyman Auditorium are must-visit places.

Tennessee has a rich nature, so there’s an abundance of national and urban parks. If you want to escape from the city hustle, then head to Shiloh National Military Park, Rock Island State Park, or Big Ridge State Park.

Excellent urban options in Nashville are Cheekwood, Centennial Park, Radnor Lake State Park. These, along with Stones River Greenway of Nashville Trail and Natchez Trace Parkway provide perfect conditions for biking or for a walk in nature.

New York wins this one due to its superior infrastructure development and boundless labor market. Nashville is generally cheaper with a far better commute time, but the income is lower.