Shipping a car from Hawaii to California

Shipping a car from Hawaii to California Guide 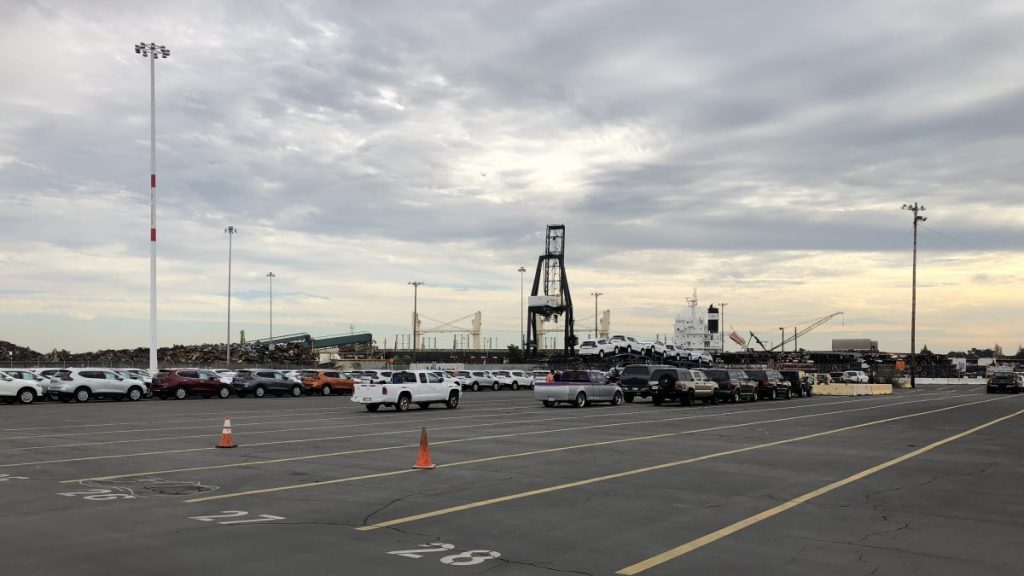 Auto transport to and from Hawaii has its specifics. Learn more and request a quote online or call our team!
Shipping a car from Hawaii to California is a frequent route for Corsia Logistics. Our experience guarantees peace of mind from pick-up in Hawaii to unloading at the port in California. Our auto logistics experts will guide you through the process and help you make all necessary arrangements. To ask questions please, do not hesitate to call or chat with our team now.

What are my options when shipping a car from Hawaii to California?

Your two main options for shipping a car from Hawaii to California are port-to-port and port-to-door delivery.  Port-to-port option is viable if you live close to one of the mainland ports, which are Port of Long Beach, Port of Oakland, and Port of San Diego. Otherwise, we recommend a port-to-door delivery. You can avoid all the hassle of going to the port and, instead, let us arrange the logistics of delivering your car to a destination of your choice in California.

Both ocean freight and ground transportation are affected by a number of factors. Exact pick up and drop off locations together with your vehicle’s make and model set the base price for shipping. The type of transport you choose and how fast you need your car will contribute to the cost of shipping. Whether you car is operable or/and modified also matters. The most important factor, however, is the current supply and demand situation on any given route.

What documents do I need to ship a car from Hawaii to California?

When shipping a vehicle from Hawaii to the mainland, the following documents are required for your vehicle to be loaded on a vessel:

At delivery, you will also be required to sign a Bill of Lading (BOL), which also serves as an inspection report.

How long does auto transport from Hawaii to California take?

Transit time from Hawaii to a port in California is two weeks on average. Then we add transit time to your final destination, should you require delivery from the port to your home or office address in California. Due to the nature of the industry, we can only provide you with an estimated delivery date. Road traffic, port congestion, or weather conditions can cause delays. Therefore, if you need your car delivered on or by a specific date, make sure to discuss your options with one of our vehicle relocation experts.

Is my vehicle insured while in transit?

On a vessel from Hawaii, your vehicle will be covered by a limited liability policy from the time cargo leaves a port in Hawaii until it reaches a port on the west coast. The coverage protects your car against any damages sustained during transit, not to exceed the market value of your vehicle. As for ground transportation, every carrier requires to have valid insurance. Carriers cannot operate without an active insurance policy.

Moving from the happiest US state to the Golden State

Are you sure you want to move from the pineapple paradise and the happiest place in the nation?

Jokes aside, Hawaii is the most isolated center of population in the world. The state consists of eight main islands: Molokai, Oahu, Niihau, Kauai, Maui, Lanai, Kahoolawe, and the Big Island of Hawaii. If you are tired of living in this isolated place and have found new opportunities in California we wish you the best of luck.

The birthplace of popsicles, WD-40, wetsuits, blue jeans, among numerous other inventions, California is also a cultural hub where you can meet people from literally all over the world. Compared to the Hawaiian population of over 1.5 million people, where every ethnic group is a minority, California is currently the most populated state in the nation with over 39,77 million inhabitants.

To say that you will enjoy a better weather in California would be an overstatement, because Hawaii has warm weather all year-round as well. There are only two seasons in Hawaii: Winter – from November to April, and Summer – from May to October. In sunny California you will enjoy a Mediterranean climate which may vary from polar to subtropical depending on where in the state you will settle.

Home to more than 400 colleges and universities such as Stanford, California Institute of Technology, University of California-Berkeley, and Pomona College. California is also an agricultural hub, famous for its farmers’ markets. The state is also one of the top producers of almonds, table grapes, walnuts, hay, cattle and calves, lettuce, strawberries, tomatoes, and dairy products.

According to Farm Flavor, the state is “one of only five agricultural regions in the world with a Mediterranean-growing climate, California produces more than 400 animal and plant commodities annually, more than any other state, with top agricultural products including milk, almonds, grapes, beef and more. Additionally, two-thirds of the nation’s fruits and nuts and over a third of its vegetables are produced by California farms alone.”

With a $2.75 trillion economy, which is currently the largest one in the US, California is home to some of the biggest tech companies in the world, including Apple and Intel.

Things to do in California

California is the perfect state to live in if you love nature and spending time outdoors. The state is also home to marvelous Disneyland which attracts tourists from all over the world. The land of fit bodies, California, is a place where people look healthy and frequent the gym in search of their dream physiques. It won’t be hard to join the ranks of fit and healthy, given all the opportunities for hiking, swimming, surfing, or rock climbing.

If you have one or more vehicles and didn’t really used them much in Hawaii, get ready to take your driving skills to the next level. The state of California is very spread out, so you will, for sure, need a car to get around. To register your car in California, make sure you prepare and submit all the required documents within 20 days after you establish your move. Visit the California DMV website to find more info.